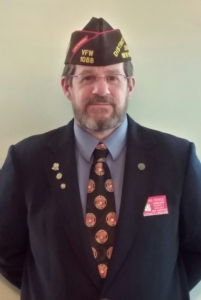 United States Marine Corps from 1980 to 1988 serving as a howitzer section chief in Operation Urgent Fury, Invasion of Grenada and member of the Multinational Force in Beirut, Lebanon.  Between 1988 and 2006 served as an Artilleryman and Tank Commander in the Army National Guard for California, Nevada and New Hampshire.  Completed his military career as the First Sergeant of Bravo Battery 1/172nd in Nashua NH and then the 172ndMP Company based out of Manchester NH, during their tour in Southern Iraq from 2004 to 2005.

Currently working as an Engineering Project Manager for a global manufacturing company.  Married to Terry Peirce, they have three children and one granddaughter.